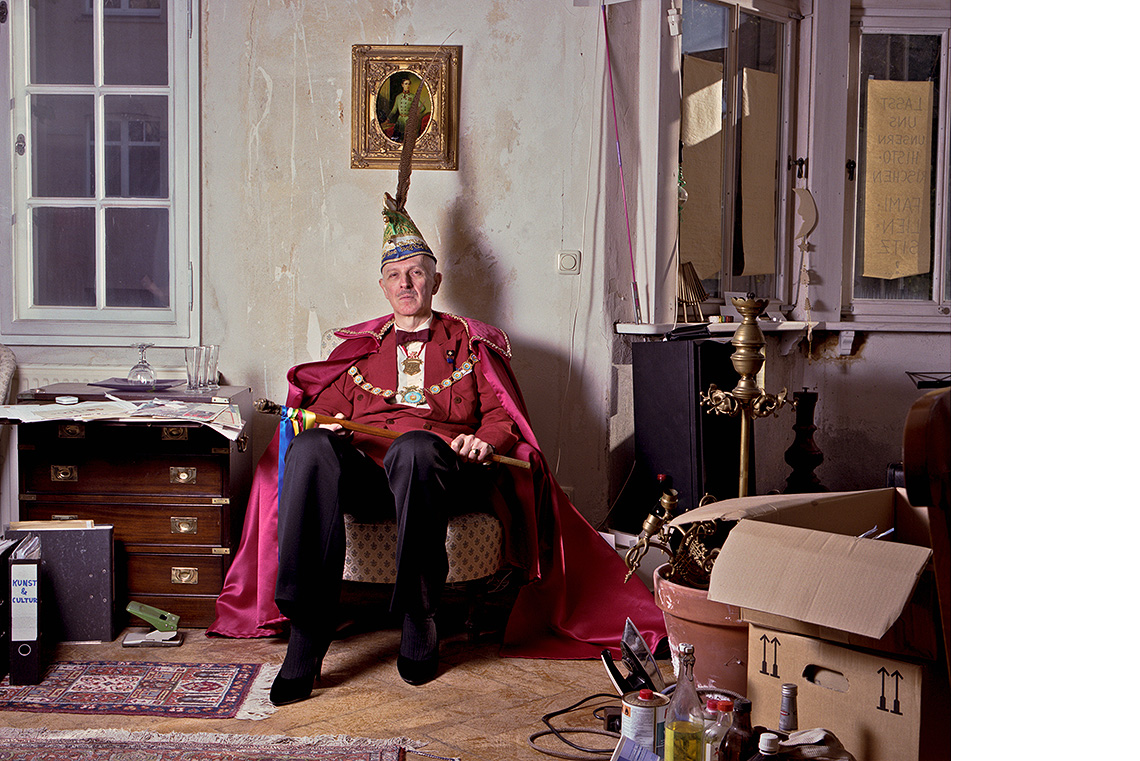 Rudolstadt is a small rural town in west Germany built along the river Saale inside of a wide valley surrounded by woods. I first visited Rudolstadt in September of 2012 during their annual firework show at the castle (Schloss Heidecksburg) which is enthroned on a hill above the town. I stood at the top of the castle and looked out upon the city below as it was lit up by spectacular fireworks. From these first moments, I could feel that there was something magical about this place.

On my second visit to Rudolstadt, my friend and I encountered a curious character while walking up the hill to visit the castle; an older gentleman dressed in colorful clothes, a white wig, high heel shoes, and a cane with the head of a lion on it. We briefly greeted each other in passing and my friend explained that this man was the last remaining ancestor of a royal bloodline here in Rudolstadt. I was intrigued but didn’t think about it too much since we were on our way to the castle.

The next day I was walking across town, and I noticed these large handwritten posters with text and illustrations hanging in the windows of one of the homes on the street. I asked my friend about this house and if she could translate the poster’s text, and she explained that this was the house of the royal gentleman whom we had crossed paths with the day before. The posters were poetically written with political messages and pleaded for help to save his family home from being taken by the government. I was told that he was being kicked out of his family home because he could no longer pay his bills. I also learned that his home had been vandalized and eggs were being thrown at his windows in protest of his signs.

Over the following months, I would return to visit my friend in Rudolstadt and I asked about the possibility of meeting with this mysterious man to take his portrait and discuss the story of his home. I learned that the man did not use modern technology and therefore the only way to contact him would be to write a letter – and so I wrote him a letter and hand-delivered it into his post box in front of his home. Several weeks later, somewhat to my surprise, I received a letter in the mail from the man, the letter had been sealed with wax and the text was handwritten in a very beautiful cursive style. In the letter was an invitation to visit him at his home.

I traveled alone on a train and carried all my gear on my back including an analog Mamiya medium format camera, tripod, and flashlights with tripods. When I arrived and knocked on his door, he opened the door, and I was surprised that he was dressed as a priest. I greeted him by his proper family name, but he corrected me immediately and said, please just call me Lion. At first, I thought he might have been showing off his sense of humor, but I would over time come to learn that he was completely serious and from that moment on I would call him Lion.

During my first visit, I was surprised to learn that the Lion spoke English because I had been writing to him in German the entire time. I learned that he was fluent in 12 languages! The Lion is also a writer of fictional books and an avid collector. His home is over 100 years old and has 50 rooms. I photographed him in different rooms of his house while he showed me around and told tales about the items from his collection. The Lion collects a vast variety of items, but he is particularly interested in lions – and his lion collection includes clocks, books, tapestries, dolls, and more. With each subsequent visit, I would be shown new lion-related items from obscure magazines to custom-designed works in metal and wood; his collection of lion paraphernalia is not officially documented but it may be one of the largest held by a private individual.

The entire project is documented in a series of medium format photographs that document one man’s story from royalty to poverty. I shot the series with an analog 4×5 medium format camera from the 1970s in part because he said it made him more comfortable having his photo taken with this old-fashioned-looking camera.

Each time I visited I brought my camera and a bottle of red wine that we would drink together from dusty glasses that appeared as though they had not been used for quite some time. It was great to hear about the stories of his youth and I documented each visit with a couple of portraits. Everything in his collection had its own incredible story. Behind these magical stories and visible in the portraits were the unfortunate realities of the present, a time in which the Lion was struggling to keep his home. Over the following years, I met with him numerous times to sit with him, discuss his life, and document his story in photographs. This series is a selection of those photographs, and is dedicated to the Lion.